Wade in the Waters

Elysia was born on March 20. This week, I’ll be sharing different pieces of that experience, a day at a time. All of the posts about Ely’s birth are here.

If you’re confused about all of this, check out the posts under the surrogacy category, you’ll catch up.

Each of my own babies had their a life as a metaphor, before being a born, literal individual, fraught with personality independent of my interpretation of them.

Silas was a sea creature. I called him Baby Beluga, because he moved with slow rolls and waves. I imagined a big beluga head pressing against me. When I told the story of his birth, I described the experience of his body washing in on the tide as feeling like giving birth to a squid–all slippery arms.

Petra was our Little Bird. Her movements in utero were fluttery and staccato, so different from her brother’s undulating waves. When she was born, a little scrawny and big-eyed, she looked like a hatchling.

These metaphors wore off eventually, as each of them grew into themselves in the first year (although Silas was a chunky little whale for quite some time…).

I never had a nickname for Ely on the inside. Unlike my own children, the metaphor I held for this pregnancy was about the process, not the product. Many surrogates refer to these pregnancies as journeys. When I first encountered that language, it felt alien, but before long, it became the only possible way to think about it. Most of us have literal journeys; traveling great distances for embryo transfers is quite common. But it’s also a figurative journey, getting to know friends of the road who are only with us for this piece of their trail before we diverge, a cataclysm unlike a more normal pregnancy. The journeys of my own children’s pregnancies ended with a union–when they were born, we were closer than we were before. Ely’s was a parting of ways, a travelling pair disbanding at the journey’s end. Before very long, I could only think of this pregnancy as a journey, Ely, my tiny traveling companion. 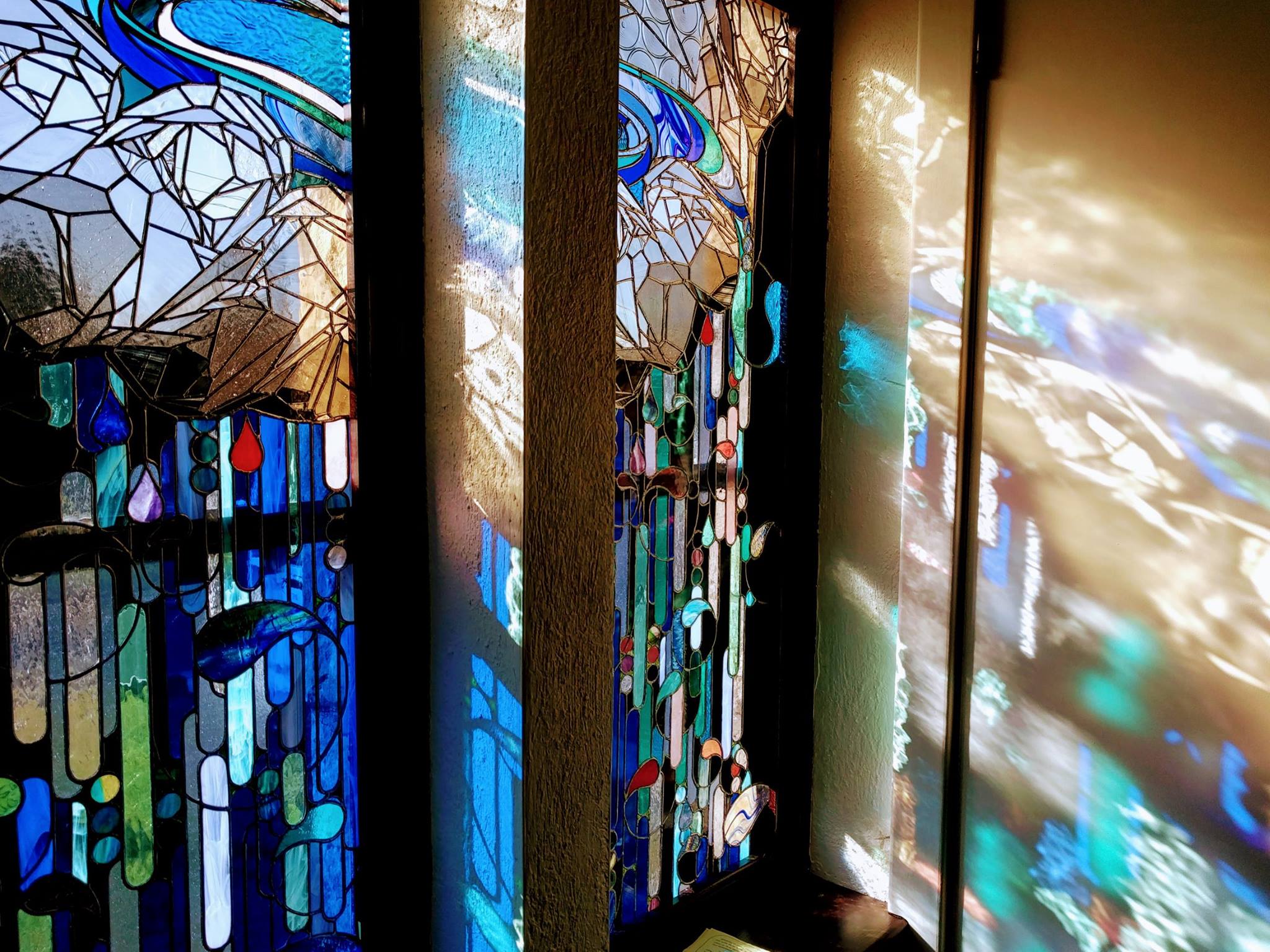 This specific journey, though, was always also a water metaphor. Beginning with the image from Zac’s window, of God’s blessing pouring down like rain, the overflowing abundance that taught me that I could do this, that I, too, was abounding with love, this journey was through water.

One thing Ely has in common with my own babies is that she has been showered with art gifts, like fairy blessings. A layers-deep metaphor is a writer’s version of an art-gift, right?

When Jennifer said, “Sometimes, God leads us to the edge of the swirling sea, and the path God clears is only one step at a time, and yet we walk through on dry land,” she gave me an image and also a key. She showed me how to cross the water. At the time, I thought of the next step as being from where I was then, a year and a half ago, to where I am now. I felt like I could imagine everything up to a few minutes after the birth, but I didn’t know how I could possibly be ready for what came next.

As it turned out, there was a great deal more swirling sea between there and here than I understood at the time. More times than I can count, I found myself praying, I don’t know how I do the next thing. Show me how to do the next thing. I prayed this the day a box of medications showed up at my door and I was instructed to start injecting them into my body. I prayed this on the hotel shuttle, riding through the early morning darkness to the airport, to fly across the country and begin carrying a new tiny life. I prayed this when the first transfer failed and I had to decide whether to try again, after a traumatic experience at the clinic the first time around. I prayed it from one nauseous day to the next, and from contraction to contraction. And every time, all God offered in response was the memory of Jennifer speaking those words to me. Every time, although I wanted more, it was enough. It was always enough, to just look at the patch of dry ground I was on, and trust that the waters would part, one step at a time. And they did.

A couple of months ago, I decided I wanted a piece of art with these words that had guided me through all of this, and I wanted to give them back to Jennifer. I’m the worst person ever at every visual art form ever invented. Luckily, I know a fair number of people who are much less bad at that sort of thing than I am. I asked a friend who is an artist (also called Jennifer, as it happens), if she could do something with these words and images.

What she created captured everything I felt when I meditated on those words–the chaos and also the tranquility. The solidity of the stone, and the question mark of the next step. The colors and the swirls even echoed Zac’s window, whether on purpose or by luck, I’m not sure. When I saw it for the first time, I could hardly breathe. 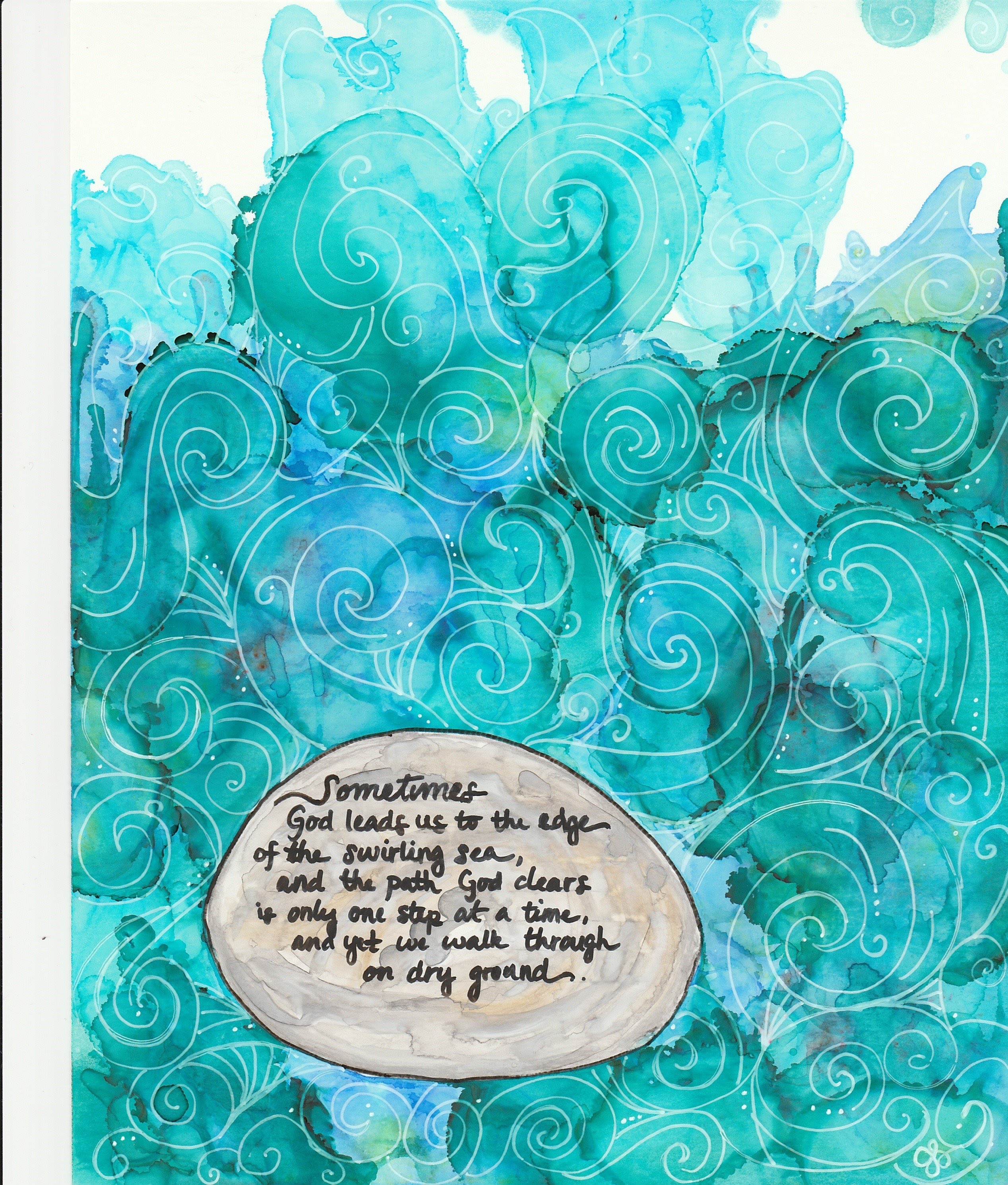 It’s hanging on the wall in my living room, where I see it constantly. A solid reminder, for all the swirling seas yet to come. Is life anything but a series of impassable waters?

When I gave Pastor Jennifer her copy, she said, “I think these words are a gift from God to us.” She didn’t remember that she’d said them, but she appreciated having them returned to her.

Another piece of “friend art” came our way, after Ely’s birth. Kirsten, who had written poems for each of my children (Petra, Silas), surprised me with a sonnet for Ely. She wrote, “My sonnetator is a bit rusty, but there’s lots of love in here to offset the idiosyncratic scansion.” The first thing I noticed was how much water is in this poem, from the first line to the last. I don’t think I had told Kirsten that my mental map of this journey was through the sea. 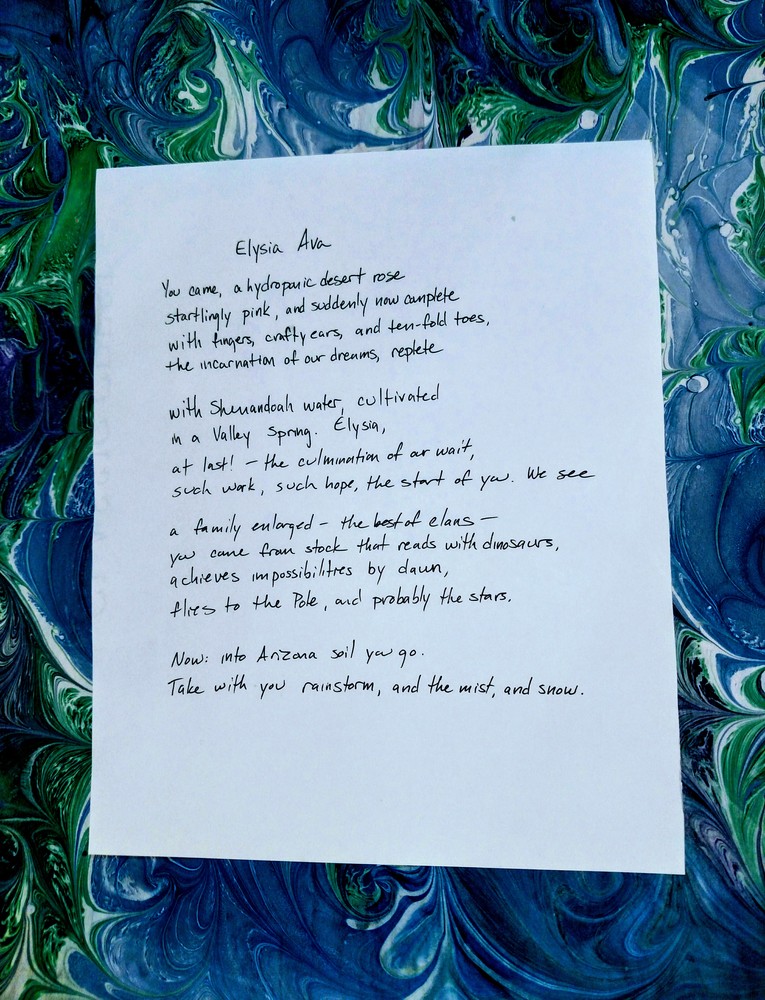 Ely was born into water, in a rainstorm. I could hear the rain outside while I labored. One step clearing at a time.

We had a lot of people there, a contrast from when I had my own babies (those births were exclusive events–me, JC, midwife… baby. The end). My mom expressed surprise that I was alright having so many people there, including Tiffany, a birth photographer. She was doubly surprised that I gave Tiffany permission to post the birth pictures on her Facebook page. I had the crazy thought that I wouldn’t have been alright with that if it had been my baby, but somehow the fact that she wasn’t mine made it different.

As it turned out, I am incredibly grateful that Tiffany was there with her camera.

All along this journey, people have tried to tell me that it is such a big thing to be doing. I’ve insisted that I’m just doing the one thing that is in front of me. That’s all.

Tiffany sent me the birth photos the day Natalie and Logan and Ely left town. It was already an emotional day–midwives describe day three as “the crying day,” because it’s the day that the hormones all show up or crash or whatever they’re doing. And then saying goodbye to them was hard, too. Not because I wanted to keep the baby or anything, but because we had all been through this amazing and impossible experience together, and parting is hard.

And then I sat alone and paged through Tiffany’s photos. Through them, I was able to finally understand the magnitude of this entire thing. My focus had been so one-step, next-step, I couldn’t begin to process the big thing of it. I created a family. And I could see it in these photos, in a way that I couldn’t see it just being present and experiencing it. During the birth, I was moving from one wave to the next. I couldn’t see more than the tiny scrap of dry ground in front of me. But through Tiffany’s lens, I was able to see what could begin because my journey was ending. I thought of Miriam, finally clear of the waters, and turning around and seeing how big the sea was, singing in celebration of the journey and its magnitude, finally able to get a glimpse of the whole.

Later, I told Natalie this–how I wasn’t able to even understand all of it until it was over. She said, “I can’t imagine how you felt. I don’t want you to feel empty. I want you to be overflowing. I am.”

I wondered, in that moment, if she remembered that the subject line of the email I wrote to her and Logan, to tell them I was ready for this journey, was, “I’m in, and overflowing.”

“I’m not empty,” I told her. “Definitely overflowing.”