But seriously, what about the children?

Elysia was born on March 20. This week, I’ll be sharing different pieces of that experience, a day at a time.

If you’re confused about all of this, check out the posts under the surrogacy category, you’ll catch up.

As I said a while back, a number of people were concerned about how it would affect Petra and Silas to have a pregnancy and no new sibling. I said all along that I thought they would be fine, and that I would not have done this if I didn’t believe they’d come through it relatively unscathed. Now that we’re on the other side of it, I can say that the kids are fine. Of course they are, but I must admit I had worried a little bit.

A couple weeks before the birth, Petra started to act very strange about the baby, insisting that she didn’t want to see her at all. She was very upset about the whole thing, quite suddenly. After some prying and prodding, I discovered that she had overheard a joking conversation between me and Natalie. Natalie got an email about some stuff back home, and she said, “Well, I guess I’ll have to go back to Arizona this week!” and I said, “Don’t worry, we’ll put the baby in the mail.” Petra knew that we don’t mail babies, and so she decided that this meant we would be keeping her, which she very definitely didn’t want. I should have known better than to joke about something like that in front of her; I sometimes forget that she is five, and that she has very five-year-old logic. I explained to her that Natalie wasn’t going anywhere without the baby, but I’m not sure she believed it.

The kids were home for the birth, although they were mostly upstairs with Myers. I was worried they’d be traumatized by the noise, but they were not. Either JC or Myers told them that I was pretending to be a mama bear, and they thought that was pretty funny. Neither of them will tell me how much they saw of all of it…I have some photographic evidence that Silas was there for at least part of it.

Petra crept down after the baby was born, but she insists that she didn’t.

Silas was very interested in everything once the baby was born. He has an old phone that he uses as a camera and he was taking pictures of all kinds of things, from the baby to the placenta.

I was relieved that they had plans for the day, though–they were off to Marcella’s for Terrific Tuesday within a couple hours of the birth.

The next day, Silas was overjoyed to get to hold Ely. He was a little nervous, I think, but he adored her. 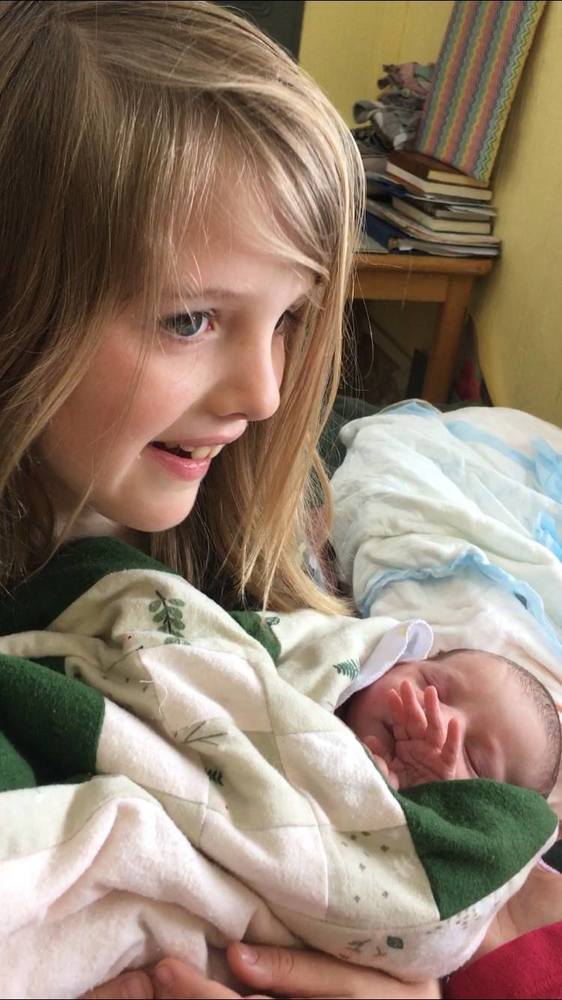 Both of them acted very much the way I imagine they might if we had another baby that was ours. Silas was very sweet and wanted to hold Ely a few times over the couple of days she was with us. Although we offered to let Petra hold her, she refused–but she would at least look at her and acknowledge her existence. Petra has been acting a bit more ornery and attention-seeking, which I expected. I hope she works through it soon, but I understand why she’s doing that. It’s not every day that your mom has a baby…

Petra seemed relieved when Natalie and Logan actually left, taking the baby with them. Since they left, she’s been somewhat interested in seeing pictures of Ely and hearing little bits about what she’s up to (she’s a baby, so… practically nothing). I set up Silas’ phone so Natalie can send him pictures and messages, and the other day, he used the Talkie to send Ely a little song he made up for her. He appreciates being able to stay connected with her, even if it’s just a little bit. 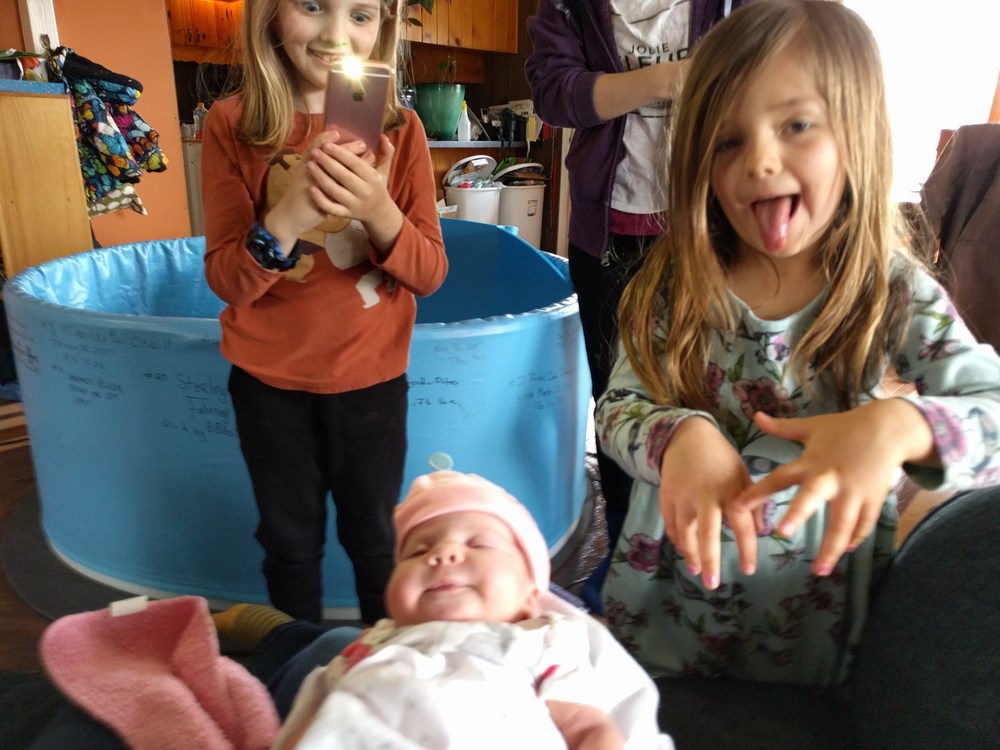 I feel bad about the things I haven’t been able to do in the past few months. My energy was low for a lot of the pregnancy (and still!), and I was practicing “radical life triage” to get through the days. A lot of things I wanted to do simply did not happen. At church on Easter, I looked around at all the kids in their cute Easter outfits and realized that I didn’t even think about dressing mine up. I had all these funny ideas about April Fool’s Easter baskets, and executed exactly zero of them. We didn’t do our egg hunt this year (I wanted to, and JC pointed out that the calendar did not make that seem like a good choice…). We didn’t get to Homeschool Day at the Frontier Culture Museum because I didn’t think I could handle all of that.

I’m starting to feel better now. My energy is slowly returning. My brain feels a little less foggy and inward-focused. I’m starting to be a better human again, and that means I can be a better mama. And my kids are ready to have their mama back!

I spent some special time with each kid, just a little one-on-one to reconnect. I took Petra to You Made It, one of those paint-your-own pottery places. She didn’t want to go at first, and then she ended up having a ball. She even thanked me for taking her to do something “just us.” Silas and I have plans to check out Ruby’s Arcade next week.

I wonder also how they will feel about this when they’re big enough to truly understand all of it. I hope they eventually see the value in what our family did, helping another family grow. And make no mistake, this whole thing was an all of us experience. It was my body, but JC, Silas, and Petra made it possible. I’m grateful to all of them.