I’m at 20 weeks now with this unusual pregnancy. I’m feeling mostly good (a little rough today, specifically, but generally more or less normal). I’m in the magical couple of weeks in the middle of pregnancy where it’s easy to forget I’m pregnant–I’m not super sick anymore, and I’m not huge yet (it’s not affecting my movement, really). I know it doesn’t last; I’ve been here before. But I’m trying to just enjoy it while I’ve got it. As far as we know, the baby is fine. No news is good news. I feel her moving a good bit. I was having some intense Braxton-Hicks contractions around 15 weeks, but they’ve mostly settled down. I wasn’t worried about them, but they were annoying. I am at this awkward stage where all my regular clothes are too small and maternity clothes are too big (by the way, shout out to all my awesome mama friends who offered their clothes–I have so much to choose from!).

Natalie is coming for a few days next week for the mid-pregnancy ultrasound, so we’ll get a look at the baby. I’m a bit nervous about this; I’ve known too many people who’ve gotten bad news at that appointment, I can’t just be excited about seeing the baby. I’ll also feel worse about bad news than I think I would have with my own babies, more responsible, maybe. I know that’s weird, but it’s true.

People in my community have been incredibly kind and supportive. So many people have talked to me about their own lives and struggles, or sent me encouraging cards or emails. I’m grateful for the wonderful people I get to spend my life adventure with. I’ve gotten a handful of weird comments, but nothing too bonkers or awful. A few people have said, “I couldn’t ever do that!” and I say, “Well, a year ago, I didn’t think I could either!” Life is full of surprises.

One funny thing: I had zero cravings with my own babies. None. I had some very strong aversions (in particular, most Asian food during my first one, which is extra funny because I have a kid now who thinks his soul is Chinese). This time around, I have a bizarre thing about gummy bears. I normally am not a fan, at all. Before the past couple of months, I literally do not even know the last time I had a gummy bear. But this time…it started with sneaking a few from the kids’ treat bags they brought home from a birthday party. Then when those were gone, I found myself awake at night thinking about them. I bought a bag on Amazon (they only sell huge bags, so everyone should be prepared to be getting some gummy bears in your Christmas stockings…). I told Natalie, “I feel like I crossed a line, in actually buying gummy bears.” She said, “It’s fine, no one thinks you’re going to be eating buckets of them.” But after placing an order like that, who knows what I might do? 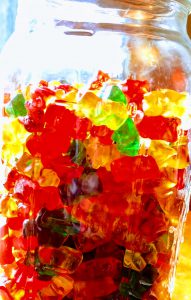 One thing that is sort of challenging is that it is still weird, and many very wonderful people seem to think the best response is to act like it’s totally normal. I’m trying to figure out how to give people permission to be okay with how strange it is. I’m trying to be very open to all kinds of questions, and working extra hard to be gracious when people clearly don’t know what to say. I still have at least one moment every day, if not more (usually more) when I think, Oh, my, is this my life? What strange choices I’ve made! and I want to give people permission to be present in the weirdness with me. I want to not be alone in how strange all of this is. Strange doesn’t mean bad. But forced “This is totally normal” is not helpful and it makes me feel a little more lonely.

I can’t quite believe we’re at 20 weeks already. With my own pregnancies, the time just seemed to drag on and on. This time, it’s zipping along. I certainly have had some difficult and long days and nights, but it’s one of those “the days are long, but the weeks are short” situations. With Silas, I think I was just so nervous and eager to become his mama that time seemed to drag along. With Petra, I knew she was going to be our last baby, and I remember feeling like I couldn’t move forward with my life until I met her and figured out what kind of person was going to complete our family. I explained this to a coworker, and he said, “Oh yea, it’s like in a superhero movie: ‘We have assembled the team.'” The day she was finally born, I remember looking at her tiny funny face and thinking just that: We have assembled the team! But with this baby, there’s no new team member to be planning for. I don’t change my role in our family/my own life when she’s born. My life will be different, because how could it not be, but it won’t be the same magnitude as having my own babies, because how could it be?

The kids are doing great about it. Silas doesn’t know WHY it is funny to tell people, “My mom’s pregnant! And it’s not our baby!” but he is definitely reading their reactions accurately and gleefully. The look on our doctor’s face last week was truly epic…

I’m not directing right now, and that’s sort of okay. I have a million other things going on, and I’m going to bed by 9 most nights, so I would be having a hard time if I were directing a play. I’m teaching acting at JMU and LOVING it. But I miss directing. I had to turn down a fair amount of work for the summer, because I couldn’t know when I’d be pregnant, how I’d feel on the drugs, when or if I’d need to go to Arizona, etc. I also had to not apply for a fair amount of work for the spring because the timing is complicated what with giving birth and all. I did a few small projects over the summer, nothing that amounted to a show; the last one closed in October (I was assisting with an opera, I think I went to about 5 rehearsals, it was fun, but I wasn’t really directing. Managing traffic, maybe). My next show isn’t scheduled to start rehearsals until late July. I’m sure things will fill in between now and then, as they usually do, but maybe they won’t. I have had some very positive conversations with people at various theaters about next year (2018-2019). What does all this have to do with surrogacy? Of everything I’ve had to submit to or give up in order to do this, turning down work I wanted and could have easily had feels like the biggest sacrifice. Bigger than the medical stuff, bigger than the physical discomfort, bigger than the social awkwardness, bigger than letting other people make decisions about my body. It sounds so dumb when I write it out like that, but it’s true. Last year, I felt like I was generating some true momentum with my work. I was suddenly making connections all sorts of places with interesting people who wanted to work with me. It wasn’t on fire, but it felt like it was going somewhere. Working in a business where momentum is hard to gain, pushing the pause button at this point feels like a serious step backward. I’m trying to reframe it, spending this year more on networking and connecting, deepening my relationships at the schools I work with and expanding those networks through responding to plays for KCACTF. But it’s still hard to wonder if I’m missing something huge. Having taken a bit of a step back when each of my kids were on the way and newborns, I have the perspective to know that it’s not forever, and it’s a blip in the big picture. But right now, it feels like a big blip. I keep thinking of what Katherine said when I told her last year that I was going to do this: What an amazing act of creation for an artist. I can’t wait to see what your work is like after this. Me too. I just wish it didn’t feel like so long a wait. 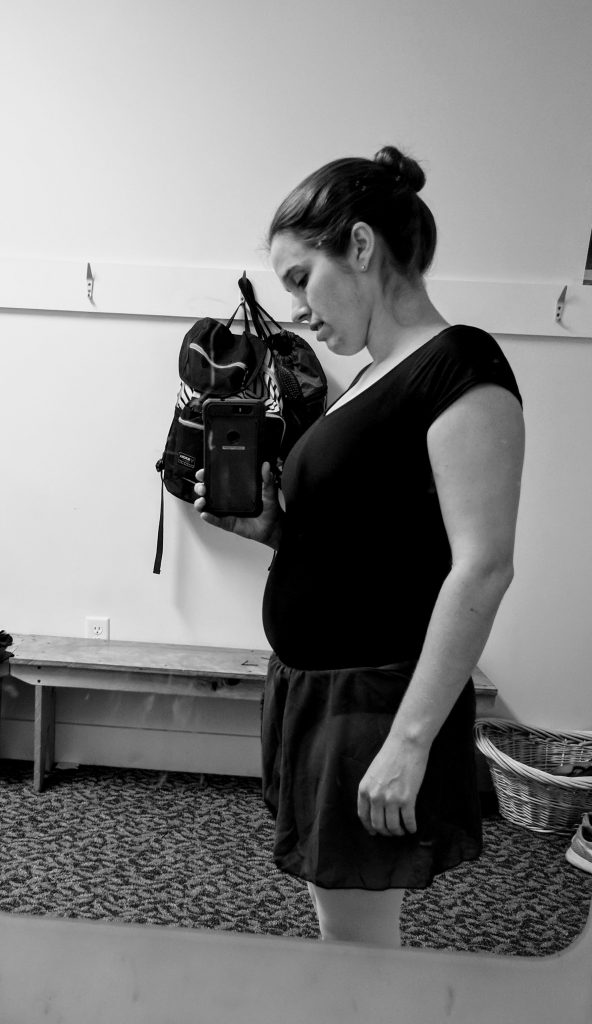 Dance has been a challenge, too. I didn’t do ballet until after Petra was about 2, so I haven’t been through this strange feeling of trying to dance when my center of gravity is shifting hourly and my abdominal muscles have a tiny person shoving them apart. I spent some time with Corey, who has two kids and teaches dance, a few weeks ago. She gave me some ideas about how to change both my physical positioning and my mental game to help me keep dancing without hurting myself or learning bad habits. The biggest thing she said was to think about corrections coming from the muscles in my back. That’s been helping, and might make me even better after all of this (it’s a good habit to have, and I don’t have much choice but to embrace it).

I’m trying to be honest with myself and with others about the things that are hard about this, and also about how easy some of it is, at least right now. It does feel good to be halfway done. Or more, depending how I count it. When I saw Laura at about 15 weeks, she said, “Is that all? I feel like you’ve been pregnant forever.” I’m sure she felt that way because it’s been such a process. In some ways, this baby has the gestation of an elephant calf–about 20 months from when they first asked me to do this to her estimated due date! In that case, I’m more like 3/4 of the way through it…